My daughter is now a Missus.(Mrs)

Natalie is my first child to get married, What an experience.

I was chatting to a friend of mine, Joy, at a Christmas party and she asked me if I was taking someone to my daughter’s wedding. No, as I just wanted to concentrate on my daughter’s day, Joy suggested if I paid for the nights stay, she would come and be my driver, not that there is anything wrong with my driving BUT it was Sydney traffic and I had enough to think about on the day with out worrying about what that crazy driver up ahead was doing. LOL.

The trip was uneventful as we made our way to the Manly Pacific Hotel where Nat and her bridesmaids had booked a room to have their hair, makeup done and get dressed for the Big Day. 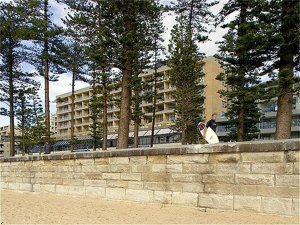 which was nearer to the Narrabeen Surf Club for the wedding reception.

The wedding ceremony was held at Lady Fairfax Lookout overlooking Sydney Harbour. Nat and Dan asked me to do a reading during the service, so I was glad Joy was the driver for the day as I was a bundle of nerves. I have no problem standing up in front of hundreds of people to give a speech but when it is in front of family and friends, its a different matter but I was able to be a credit to my family by getting through it without bursting into tears but only by not making eye contact with Nat. Oo. lol. 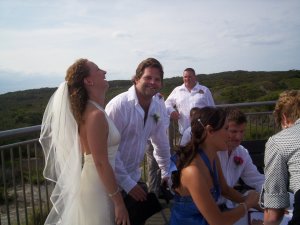 As we were having the photos taken my daughter approached me and asked it I would like to make a speech at the reception also.. OOOOooo. Okaaay. Well, I couldn’t think of anything to say, I knew her Dad would make a good speech on behalf of the family. So I had to think of a different approach. This needed thinking out. Off to the reception.

Yes, I would like a small glass of wine…Thank you … umm …just leave the bottle, thanks!

Sometime later, the speeches started, first her Dad, then the Best Man, various family members and then me…I had a rough idea of what I was going to say mainly something that included Nat’s mother-in-law, Sue.

It was great if I do say so myself. First I said what a beautiful and loving young woman my daughter had turned out to be, that I did not raise her alone but with the help of some wonderful women, I called up my three sisters, Tricia, Cathy and Mary, then my (former)sister-in-law Catherine, a friend Suzanne who was a neighbour I had known since I was 10 years old, next Nat’s step-mother, Betty and finally her mother-in-law, Sue. My little speech was that a mother never raises her child on her own but with the support of a network of family and friends.

I then turned to my son-in-law, Dan who was starting to look a little worried 🙂 and welcomed him and his family into our extended Family network.

Bring on the drinks, I say….Toasts all round. The night passed quickly and the tearful goodbyes were said. 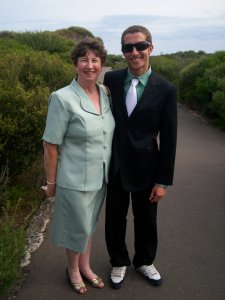 This is a photo of my youngest son, Michael and myself on the DAY.

I am trying to track down photos of my other son, Nicholas. I sure we had one taken. If not, then it will have to be a Chrissy pic maybe I can talk him into a Santa photo or maybe not. 🙂